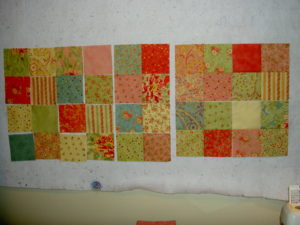 Also, during TFQ’s visit, I worked on the Moda squares I got from Hancock’s. I decided on the final arrangement and started sewing them together. More than 20 days later, they are still in the same state. I will get back to it in another month or so.

I decided to get more of the squares, after St.JCN suggested it, and make the piece a little bigger. I was thinking about how I would arrange the new batch of squares. My idea now is to arrange them the same way, but turn the whole arrangement upside down and then sew it to the original group. Since I have not made this decision visually yet, we will have to see once the squares arrive.