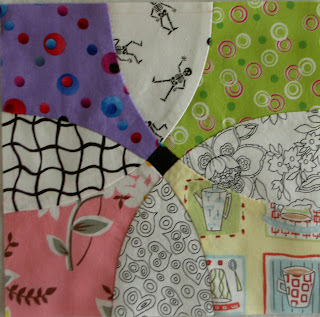 As an added bonus, I finished one Flowering Snowball (Cross Block) last week. I particularly like this one, because it has the coffee print. I think I am close to the end of piecing these blocks. I want to do a self border so I have to make those blocks. It is just a feeling, so we’ll see how it progresses.

Annie of Annie’s Quilting Stash Podcast has cataloged a group of fabric manufacturers and gives links and list of designers for each manufacturer. It is a podcast from earlier this year.

I couldn’t stay away from my workroom on yesterday. I found a playmate for the child and left them to their own devices (except for an occasional admonishment to go outside away from the screens) while I sat and sewed. I sent Aja’s Bullseyes off to her, as I may have mentioned, last week. She received them Thurs or Fri, so I only had my blocks to work on.

This calling business was a bit disconcerting, because it seemed like my mind had a mind of its own. Normally, I will sew a bit, do the laundry a bit, sew a bit more, make my weekly phone calls, sew a bit, change the laundry and do the dishes and sew a bit more. Yesterday my body and mind were united and they were having none of it. I went to the workroom and basically stayed there. No dishes, no laundry and the dinner didn’t get started until almost 7pm. IT WAS FABULOUS!!! 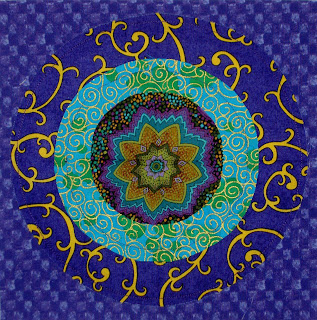 This is one of the blocks and I really liked it. I fussy cut the last circle and was sad to slice it up, because the flower is so perfectly displayed. 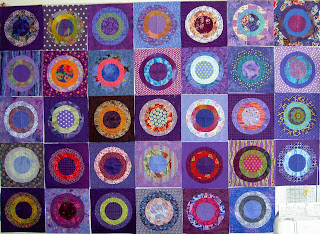 These are my blocks after I have added the last circle. The blocks in the upper right hand corner are blocks that weren’t in the photo I posted the other day. My design wall isn’t big enough to accommodate all of the blocks. 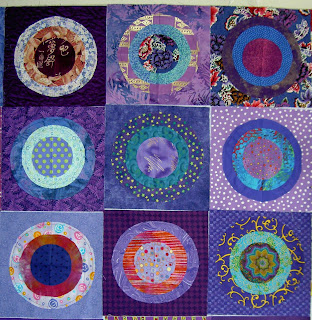 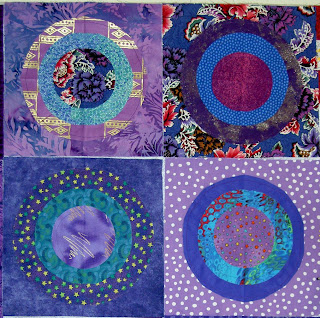 These are details of the blocks from the upper right hand corner.

Now my Bullseye blocks are nearly complete. I have sewed the last circles on and trimmed all the blocks down to 9.5″. 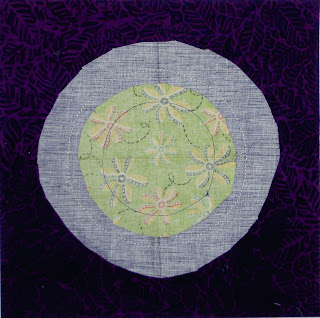 This is how the back of a block looks after I have sewn the last circle and before I have cut the back of the second circle out. You can see that Julie and Aja have cut out the backs of the background and the first circle. 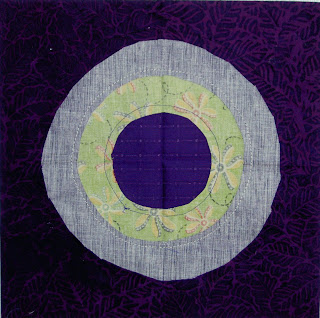 Here is how the above block looks after I have cut out the back of the second circle. This reduces bulk and provides lots of lovely circles for another project.

I finished the process of cutting out the backs of the second circles, and I have sliced the blocks into quarters. I am preparing them to be sent off to Julie and Aja. 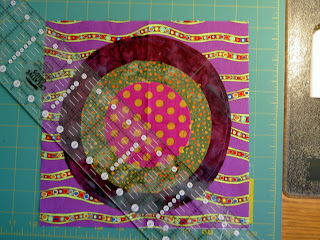 Here is how I set up the blocks to slice them. I love the Creative Grid rulers, because they have a lot of different markings that allow you to line up the ruler so the block is sliced very precisely.

I keep two quarters of the block and send one quarter each to Julie and Aja. 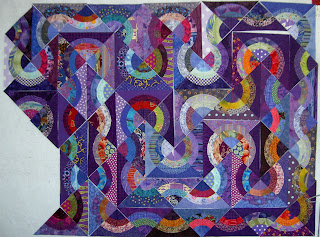 Here are my slices. I just slapped them up on the wall, but I like the internal maze surrounded by a larger maze and may go with that type of design for the final design. I think I will have to put some of the stronger colors, perhaps red, in that internal maze so that it stands out. I will also want the self bordering technique to give the piece a finished look You can see it in Seeing Red.