The other day, I was thinking about the Snowball Wreath block. In the process of linking to that post and looking at the post photos, I found that a number of my older photos were still on Blogger. What I mean by that is that photos displaying here on WordPress actually live on Blogger.

Yes, Artquiltmaker started out on Blogger. When I migrated, I migrated all the posts and links and, I thought, the photos. No such luck.

No normal person would do this but the incongruity of the photos being in two places nags at the librarian in me. I have been thinking of deleting the Blogger site as it is redundant and the photos are taking up space on my Google account. I am also afraid somehow the photos will get deleted or become unavailable, making 3 years worth of posts worthless.

It has taken me awhile to find a reasonable process for the project. I have tried a few different methods of getting the photos where they need to be. I have uploaded a lot of photos from Google something, but apparently not all lived there. Some, from the first days of the blog are living on a webspace associated with my personal email! I didn’t even know I still had access to that space! Access is a misnomer. I don’t remember how to get to it or what the password is. I was also linking to some photos from Flickr, which had to be moved. Finally, I had to find photos on my hard drive and backup drive as well.

Basically, the photos were a mess.

As you can see, this is a big project, but it is also fun to look back at what I was thinking about in 2006 (the year I am working on now).

I was thinking a lot and posting a lot about Thoughts on Dots, which I am fixing now. You must have been bored stiff with those posts!  I moved one patch and wrote about it. They are serious process posts. 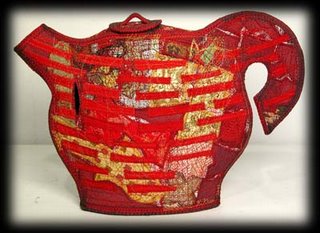 I had forgotten about Kay Khan’s work. I love the 3D teapot.

I also was interested to see the recap posts I did. In one post, I picked out the best quilts I saw at all of the shows I visited that year. That post had a lot of photos, which was a pain. I was interested to see that my fabric choices have stayed consistent as have my design sensibilities. That post also had some quilts that look like they could have been made by MQG members, though it was made LONG before the MQG came on the scene.

This project will take me awhile, but the good part is that I get to revisit my quilt past.

In going through old photos, I found photos of the Handbag Sampler I have been talking about recently.

I haven’t actually found the blocks, but, at least, I have a photo and sort of know what I have.

I found a photo of a Nosegay block that I made (or am in the process of making as well. The 9th block is good, because that means, if I find the blocks, I can just put the quilt together. I don’t have to search out fabric, which is all very distinctive. Of course,in terms of learning, it isn’t quite as comprehensive a Sampler as the Aqua-Red Sampler. There is no applique completed.

I have to find the blocks before I decide what other blocks to make.