That sent Sarah on a frenzy of Googling, where she found that the Library of Congress has quilt photo called Royal Cross that has similar bones to the Cross Block. Sarah also found that Tazzie has a pattern for the Royal Cross.

Then Leslie chimed in with the sudden realization that she had a quilt from her Grandma in this [Royal Cross] pattern. She posted the pics, which I have reproduced here. 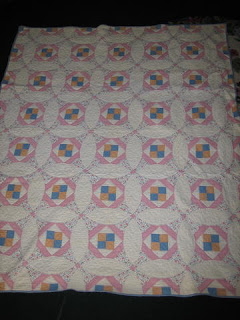 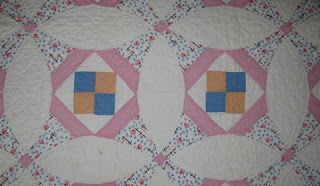 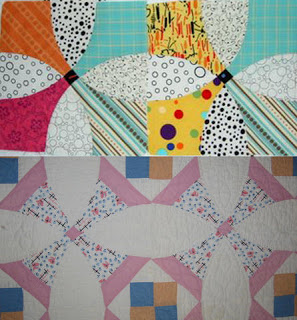 Comparison between the Royal Cross and the Cross Block.

Blocks are constantly modified to suit the needs of the maker and I am sure that these blocks are no exception. My block and the Royal Cross look similar in the middle, but the outside of the Royal Cross looks like it is meant to draw attention to those squares in the corner. I can’t say much about that as I went on and on in one post about the center of this, among other patterns, not actually being the center. I’ll have to look through the Barbara Brackman book and the Kansas City Star books and see what I can find. If all else fails I’ll post a picture on the AQSG Yahoogroup and start sending photos around to various quilt historians.

The lottery is up to $25 million, so I guess I didn’t win on last week’s ticket and will have to buy another one. If I had won, I would do the exact same thing that I did this weekend: sewing, visiting with quiltmaking friends, writing about quiltmaking and more sewing. I could have done without the proposal writing and the cold I have been fighting off, but you can’t have everything. 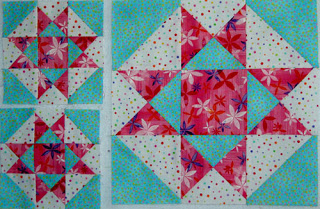 You may notice that these blocks look very like the blocks that JulieZS showed me on Wed. I looked the block up in Around the Block, a very useful book by Judy Hopkins from several years ago. I was sort of inspired to try the block, so I made the big one for Julie and the 2 6″ blocks for two different friendship quilts that someone requested. The small ones are smaller than I anticipated, but perhaps I will make a couple of more in order to fill in more space in those friendship quilts.

It was Mav-Week as well. In addition to seeing Julie, Mrs. K was in town, so we met over in Oakland and went to lunch at a nice little vegetarian place (excellent lemonade) down Washington and around the corner from the 10th Street convention center entrance. Mrs. K was visiting the Bead Expo. I thought about going, too, but decided to sew and try to shake the cold instead. Of course, she and Vicki had to show me their purchases and, among other things, Mrs. K had bought a strand of gorgeous millefiori (according to St. JCN) beads. 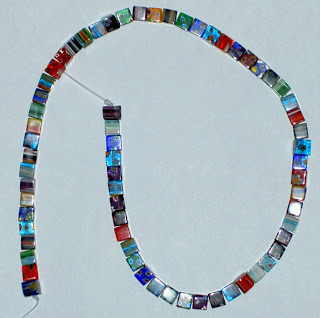 I had to have them. Mrs. K was kind enough to sell them to me and go back and get another set for herself. I am thrilled. Mrs. K puts them on the ends of the ties to her prayer boxes and I will have to find something equally fantastic to do with them. I hope you can get a sense of what they look like from the photos above.

As I mentioned, I also pressed the fabric that St. JCN sent me. I am quite proud of myself for not letting it languish for months unwashed and then pressing it right away. To add icing to the cake, I cut pieces out of the new fabrics as well: strips for the pineapple and corners for the Cross Block. Below are the corners for the Cross Blocks (perhaps called Royal Cross! More on THAT later) that I cut out of those fabrics. 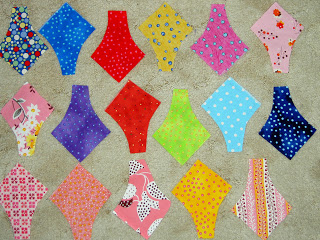