If you don’t have time to read much today, here’s the short version: not much.

If you do have time to read the entire post today, the long version follows. 😉

Not sure why, but this week seems to have been especially busy. I think I may have accomplished a lot in the realm of quiltmaking and it just may not feel like a lot. Somehow not working on my own project and working on gifts doesn’t feel much like I am making progress. Perhaps, it is just that I am not making progress on my color studies or on my UFO list? 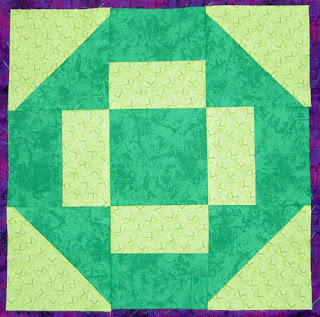 I wanted to put a small border on the above pillow for the Principal, but I was kind of stymied for what color. I originally thought of a strip of white piping, but decided I didn’t want to deal with making one. St. JCN, in all her wisdom, suggested a white strip, but, somehow, that didn’t seem right. As I was drifting off to sleep one night, the little voice in my head whispered: Violet. GREAT! I tried it (see above) and thought it looked good. 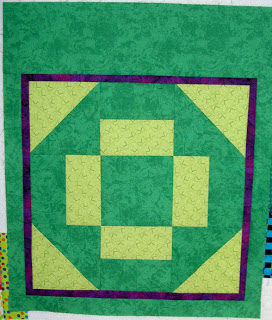 The reason I wanted a small border was so that the green border would not “bleed” into the green block. The violet seems to clearly define the block. I am pleased with how it worked out. 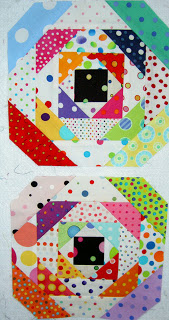 I also put a few more rows on to Pineapple blocks 11 & 12. They are getting there. 3 more colored rounds to go. I have the background strips cut for the next round, but haven’t sewed them yet.

Special Whine Redux
Earlier this week, as you probably noticed, I was feeling a bit sorry for myself and the state of my pictures. I went back and looked at Yarnstorm‘s post called Square Dance and the photos she included. I realized that while her photos are totally fabulous, one thing about how she structured this post is that she put up her inspiration and then showed the quilt that came out of it. I really liked that. As a brief aside, I like the quilt-to-be she shows, because it is simple, but not boring. She is working with color in a way that I have been trying to do lately (see Thoughts on Dots and some of the other square pieces I was working on last year). She has done a fabulous job with blues, something that I greatly admire.

The other thing about Yarnstorm’s pictures is she has a great eye and she crops very well.

So, I will stop whining, crop my pictures and keep working!