Skip to content
Mark Lipinski also, apparently, has a new line of tone-on-tone fabrics called Elements. They remind me of the swirly fabrics from a few years ago that I used in Spiky Stars (http://www.artquiltmaker.com/sub_pages/spiky.htm).
Mark Lipinski of Quilter’s Home fame highlights the recent issue of McCall’s Quilting, which has more bags in it. I might just have to get a copy, or at least check one out. Lots of people are asking me about bags now. 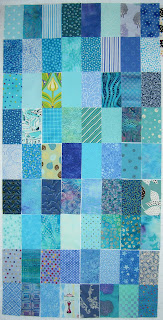 Remember the Hop, Skip and Jump pattern I tried in December?

I thought I was, but I am, apparently, not done with the blues. And there is that rectangle shape again (2.5’x4.5, FYI). While the Tarts Come to Tea has been on the design wall, these blue rectangles have been up there, too. They are actually taking too much space (both physically and mentally), so they are coming off the wall and will go back up later.

Last weekend I had a little time and wasn’t organized enough to work on an actual project, so I cut blue rectangles. I have to be honest, though. I was trying to prevent a fabric avalanche and decided to fill in some space in the fabric bins. It is much easier and more accessible to stack fabric up on the sides of the closet. Sadly, four foot stacks eventually end up in fabric avalanches. Appropriate for this time of the year, though…

A fabric avalanche was definitely imminent and by moving fabric around and pulling out the blues, I felt like I was actually working on a project rather than organizing.

Some of the fabrics I cut from the scraps that appeared after I made the back for the Crazy Test . It was interesting to see some of those older fabrics mixed in with the newer turquoises.