I don’t know where this month has gone. Frankly, I am glad February is coming to a close, but I still wonder what happened to the days.

My next longarm day is March 2 and the Eye Spy is in line to be quilted. As a result, I needed to make a back and get the Eye Spy in shape for finishing. I put the diamonds in to fill in the diamond shaped space, so that I wouldn’t have to hack through any of the hexagons (which is what most patterns recommend). I didn’t want a zig zaggy border, so I started out by cutting off the excess from the diamonds.  I had intended just to leave the edges straight after cutting – no borders.

While cutting the diamonds in half, I realized that the middle of those diamonds was one big bias edge. This brand spanking new bias in addition to 3 sides of each hexagon being on the bias was asking for trouble during the quilting process. The top  needed some stabilization, so I added some borders and corners to the odd shaped corners of the top. 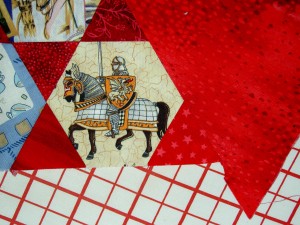 The little star printed piece is the patch I had to insert into the corner to make the corner a 90 degree angle. You can see it really well above. 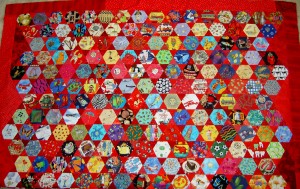 Above is a picture of half of the top. The quilt top is another monster and I gave up on moving furniture to fit the whole thing into one picture. I am going to have to think up a way to photograph whole quilts, especially these huge things I seem to be making.

I used a new (to me) method of measuring for borders.  I measured width-wise (across) and lengthwise (down) in three places on the quilt and cut the borders to the average size. I did have to ease, but the top is flat and I am happy about that. I found one little tuck that I will need to fix before the longarming. All in all it worked pretty well.

I acquired the crocodile fabric a long time ago, perhaps in the early 1990s from a woman named Joan who was getting rid of everything. It is a Joe Boxer fabric and I never saw anything like it. I also never heard of Joe Boxer selling fabric, but they totally should, because their fabrics have such a sense of humor.

At one point, I thought I would cut out the alligators (crocodiles??) and applique’ them on something, but the inspiration never struck. Also, I only have about a half yard, which limited what project I could complete using the fabric. I came across the fabric over the weekend and proposed it as a backing fabric. The Child took a liking to it, so I will use it as part of the backing. Shopping in my fabric closet can be fun!

I had some leftover hexagons, so I put some straight edges on them and will also use this piece for the back. I need to find a nice way of making this bit play nicely with the crocs.