I originally posted the prompt nominally for the Fourth of July. I am posting the response in celebration of special person’s birthday. A Twofer!

See a variety of responses on the Flickr group!

I am continuing to obsess about various things. With the creative prompt it is the doodle umbrella.

The original prompt was posted earlier today, in case you didn’t see it.

Have you looked at the Flickr group lately for inspiration?

Definition: To come open or fly apart suddenly or violently, especially from internal pressure. b. To explode. 2. To be or seem to be full to the point of breaking

Burst mode: a mode of operation where events occur in rapid succession.

Post the direct URL (link) where your drawing, doodle, artwork is posted (e.g. your blog, Flickr) in the comments area of this post. I would really like to keep all the artwork together and provide a way for others to see your work and/or your blog. 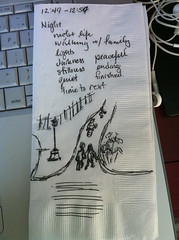 Sonja, a CQFAer, has reached the epitome of the Creative Prompt Project. In this response to Creative Prompt #76: Night, she got an idea and jotted it down on what she had at hand! I love this! I will strive to achieve this level of creativity.

Thanks for participating, Sonja! Keep up the good work!

I am sick of Wordless Week. It was great while I was gone, because I didn’t have to worry about posting, but now that I am back (yes, I will tell you all the details) I want to toss up some words and get some words back from YOU!

I am sitting here listening to Patrick Monahan and Train singing “Hey, Soul Sister” and “Save Me, San Francisco.” Suddenly, I am obsessed with these two songs and have been listening to them over and over for the past half hour or so. I don’t know what they mean, but I love the sound. I first heard “Hey, Soul Sister” on a re-run of CSI: NY, then I found the performance on YouTube and, then, had to buy the song. Now I can listen to it, as well as “Save Me, San Francisco” whenever I want. It is a good thing I am home alone (as I write this), because I am sure the family would be screaming for me to stop torturing them.

Along the lines of obsession, I have been making pillowcases for the past 24 hours. I have 4 cut out and two made. Of the two, one has already been mailed as a special gift. I hope the recipient is still where I mailed it when it arrives! She told me today she is leaving! Oh well!

The fish pillowcase is made from an oooolllllddd Hoffman print. TFQ informs me that it is at least 15 years old. It was in my stack of fabrics that are designated for backs or ‘other.’ Often I buy a half yard or less (though I am having a crisis of how much fabric I should buy), which is not enough for a pillowcase.

Unless I have bought specific fabric for a pillowcase, then my general collection does not provide large enough pieces for the main piece of the pillowcase, so I dug into the back stash. If I haven’t used the fabric, it should be fair game, right? I have a lot of conversationals in this group, so they will work well for the cheerful pillowcases being requested.

I have mentioned the Million Pillowcase Challenge a couple of times. I went to the website to try and figure out where to send the pillowcases and encountered a problem. Quilt shops are collecting them. I have to donate them locally and don’t really have a local quilt shop. One is a few towns over, but they don’t seem to be collecting them. I was determined to forge ahead when CraftHope came through.

CraftHope just finished their largest project, related to the oil spill clean up in the Gulf of Mexico, ever. As is their M.O., they started Project #9, a collection of pillowcases for the Con Kerr Cancer Project. The good thing (for me) about this particular project is that they provide a regional directory of hospitals to which I can send or take the pillowcases with contact information. The deadline is September 15 for the CraftHope project. Can you make some pillowcases?

As I mentioned, The Child and I will be making the taco and robot pillowcases tomorrow. I cut all the pieces and made the fish pillowcase so that I have the steps firmly lodged in my head. He would lose what little interest he has if he had to wait around while I tried to figure out the directions. TFQ walked me through the first pillowcase (see below) and, thus, was instrumental in getting me started.

One big problem is suitable fabrics for the 12-17 year old boy set. After all, all agesa nd genders get sick. I looked at the various quilt shops I visited last week and saw some that would be ok. I saw a great selection at VooDoo Rabbit.

I saw the chocolate fabric at Britex when I was inspired to make a Sweet Dreams pillowcase for my mom. She has ongoing problems sleeping and is having a hard go of it taking care of Grama in SoCal.

The fabric has been around since the end of June and I finally got my act together and made the piece. I am happy with the way it turned out. She is coming home next week. I sent the pillowcase today and hope it arrives before she leaves.

I used the Twiddletails pattern and it is great! It seems bizarre, but works very well and I learned to make French seams! She has a store, so go buy a pillowcase kit and make one for Con Kerr. Thanks, Anina!

I have graduated from Train to Semisonic singing Closing Time, so I will end this post and work on my CPP responses, pillowcases, napkins, and all the projects I am fired up to make!

See the Creative Prompt page if you have questions about this project.

Post the direct URL (link) where your drawing, doodle, artwork is posted (e.g. your blog, Flickr) in the comments area of this post. I would really like to keep all the artwork together and provide a way for others to see your work and/or your blog.

hearts all a flutter

I am a word person.

I love to read books with excellent descriptions. Nevil Shute and Rosamunde Pilcher come to mind.

I often have to make sure I look at the visual part of art and don’t just read the description. This is especially the case at quilt shows where the artist statement can be quite interesting.

You have been reading a lot of my words lately. I have had a lot to say lately. Tomorrow I will start posting a series of pictures – with no words. I will probably caption the photos, however. This week of photos is inspired by Quiltin Jenny‘s Wordless Wednesdays. You can make up stories about the pictures or just look.

Hope you enjoy it!