While I haven’t done a lot on Serendipity Puzzle, I have made a little progress. I cut a bunch of patches and then started creating the Flying Geese elements. I wanted to have enough to be able to move the elements around and have some choices for color.

The other day, I rearranged some of the elements to start some of the other blocks that I need. 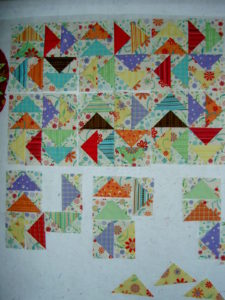 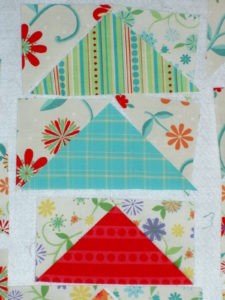 I happened to slap the above patches up on the design wall and found that I really liked the color combination. Something about the progression from red to the green stripe appeals to me. I want to figure out a way to keep them near each other in a block. 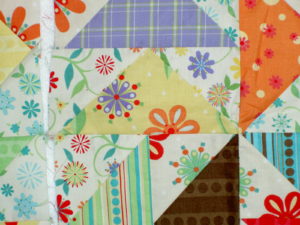 The good news is that I found out why the yellow pieces were causing me some problems. In the above photo, you can see (on the left) that the yellow point is really sticking out. It was quite a puzzle (no pun intended), but St. JCN helped me figure out that I had cut the squares too large. I switched rulers mid stream and was stuck on the cutting that I did for Thoughts on Dots and cut the same size (6.50″) for the yellow patch rather than the 6.25″ it should have been.

The offensive patch is still in the piece, but not for long. I will unsew it soon. I tossed the other too large triangles into the scrap basket, I can’t accidentally grab them. They will become something else someday.