A week or so ago, before the Martin Luther King, Jr. holiday, Sandy and AJ started ‘a thing’ on Twitter about the the Disappearing Pinwheel block. I have made a Disappearing 9 Patch (Food Quilt) and really like the disappearing part, so this ‘thing’ caught my attention.

A lot of people are working on the Disappearing Pinwheel, including many Twilters. While I was out of town for work and political wifery, Daisy already has a top done, Carole has her blocks done and Torie is close to having her blocks done. Jackie, Gretchen  and Valerie are close behind. It is awesome how dedicated they are and how they got to this project so quickly.

Now, Carole is an interesting case, and I don’t mean ‘interesting’ in a derogatory way. Carole uses a bold palette that makes a lot of her work look really different than other work I have seen. Carole’s DPW is no exception. I don’t know where she comes up with these ideas, but she succeeds with flying colors. I am so glad she agreed to allow me to share these photos with you! 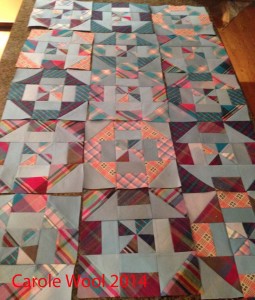 Marisa also pointed out a very good blog post about the Disappearing Pinwheel.

In case you want to make your own Disappearing Pinwheel, here are the directions that Carole wrote out:

Check out the video to see how the Missouri Star Quilt Company makes the block. Use starch!

Disappearing Pinwheel Posts in which you may be interested

Sandy’s Blog – January 13, 2014: initial post explaining the concept and linking to the video that shows you how to make the block.