A few months ago, a college friend contacted me and told me her daughter was coming to San Francisco to attend a summer art program. We made plans to see each other while she was in town and I offered to be emergency mom, should the need arise. Wouldn’t you like to go to school at a place with that view?

A few weeks (or a month?) later, I got another call inviting me to the young artist’s reception. I drove over with my BIL to view the art. The art was very interesting. Some good, some not to my taste. My friend’s daughter’s art was very appealing to me, though it wasn’t all sweetness and light as I usually like.

Her work has a mystical quality that invites the viewer to come closer. I told her about my attempt to reward viewers with surprises if they come close to my quilts and she said she does something similar.

Jillian’s work is definitely worth walking up closer and looking at carefully.

The students were given assignments and one was about buildings. I forget the basics of the assignment, but I thought her interpretation was fun and interesting.

She talked to us about wishing the cat that ran away was still in the picture when she took the photo and then delighted in describing how she realized she could add a cat even if it wasn’t in her reference image. I was delighted as well! Sometimes we feel we have to stick to the truth when doing realistic work and that just isn’t true.

The students explored all media, including sculpture. I haven’t really ever done much sculpture. I was fascinated with the airy, flying/breaking out of the wall quality of the Strings piece.

As you know, I am fascinated by 3D in quiltmaking. You have seen some of my bags, right? And the textured cube? Jillian’s piece is a whole different thing that I don’t think I could ever achieve with fabric and thread. I suppose something like this wouldn’t be the same with fabric in and thread. 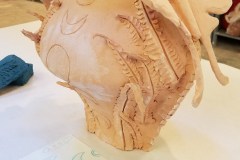 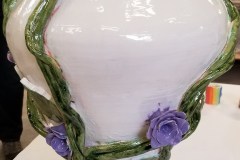 [Show slideshow]
Obviously, there were other works by other students as well. I looked at some of them and enjoyed them as well. I love the 3D aspect of the white vase. I don’t mean the vase itself, but the flowers and vines.

The first piece the young artist did when she arrived was a directed painting. The professor told them what to paint and they interpreted the directions in their own way. This painting started off with three triangles.

There is a lot going on in this painting. One thing I thought was interesting was that I could not see the three triangles. They were pointed out to me, so they are still part of the painting (an aspect of the assignment?), but I couldn’t tell you where they are now. 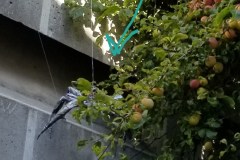 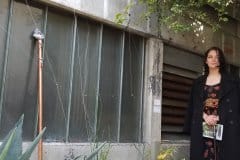 [Show slideshow]
Finally, Jillian had an installation piece. I have to admit that I didn’t understand it very well, but it had that same mystical quality that some of her other work had. Her mom was pretty distressed when it was taken down – all the work had to be removed so it could be shipped home.

The San Francisco Art Institute not only has a great view, but it also has a Diego Rivera fresco. The information said that it was painted in 1931 and was a gift of William Lewis Gerstle when he was president of the SF Art Association. There are other works by Rivera at City College of San Francisco.

This exhibit was outside of my normal daily ramblings. It was good to get out and see something different. I encourage you to do something similar.