I was taught this method of putting quilts together and have found it to be more accurate that putting rows together. I use it for block-based and similar quilts. Very occasionally I’ll sew on a long border after the center of the quilt is complete, but otherwise I try to avoid the long seams required to put quilts together in rows.

Using this method, usually I have only one really long seam to sew at the very end and 1-2 mid sized seams.

Occasionally you will have a quilt where chunking is not appropriate for one reason or another, which is why it is good to know many techniques. Knowing a variety of techniques enables you to choose the best method for achieving your creative vision.

First, lay out your blocks and pieces on a design wall (or design floor) so you can see what you have to work with and the order in which you want them to end up.

The quilt starts out as a bunch of pieces waiting to be put together. In the example above:

The basic idea is to put the quilt top together as you would a block: sew smaller patches together to create larger sections. I avoid sewing the quilt together in rows as chunking keeps the quilt is more square. Also, my intersections line up much more accurately.

In the example above, the border is incorporated into the construction of the quilt top. If you sew it as you sew the rest of the top you won’t need to put it on at the end. Putting the border on as you put the whole top together will also help line up the cornerstones with the sashing more accurately.

Nota bene: The picture below is numbered, so it will be easier for you to follow the tutorial. You may need to click on the image to enlarge the picture to see the numbers.

Next, sew #1 to #6, the first grey cornerstone (upper left hand corner) to the first side piece of red sashing.

Now you have two sections which you should sew together. This is how you sew the border on. If you had a second border, you could also incorporate that into the piece, but this technique works best when the border is broken up into pieces (e.g. sashing and cornerstone). You can always put additional long borders on later.

You now have your first ‘chunk’! Hooray!

Voila! You have a chunk fully sashed!

At this point, you can sew your two chunks together.

Now that you have two chunks sewn into a larger chunk, the next step is to prepare your next chunk. You do it the same way you prepared the two chunks above.

With two pieces of sashing and a cornerstone sewed to block #26, you have your third chunk. You could sew the #25-#26-#30-#31 combo to the chunk you sewed together before, but I suggest you wait until you have more pieces sewed together.

Refer to the drawing of your pieces in Step 1. Now we move up to the top of the section again and sew #3 to #4.

You will have two new chunks, one with sashing on three sides and another chunk with sashing along two sides.

Sew cornerstone #14 to cornerstone/sashing piece #5-9. You will have a piece made from three patches.

When you press, press the cornerstone seams in the opposite direction as you have pressed the other sashing already applied to block #8. This will allow you to piece your seams more precisely.

Sew the long thin piece made up of three patches (2 cornerstones and a piece of sashing) to block #8, which already has sashing on three sides.

Sew cornerstone #24 to sashing #19. I don’t have a picture of the two pieces sewn together before I attached them to the block, but you do have to sew them together before you sew them on the block. Now, sew sashing/cornerstone piece #19-24 to block #18 (middle right). 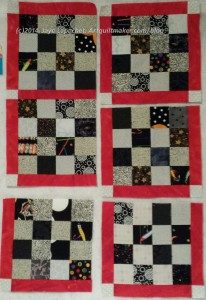 Sew sashing #29 to cornerstone #34, then sew that combined strip to block #28. Pay attention to seams so you can line them up.

You now have five chunks and are ready to sew them together.

Sew the two blocks on the upper right side together.

Sew the two bottom blocks together. Now you have three chunks.

Sew the top two chunks together, which is four blocks.

Sew the bottom chunk, made up of two blocks to the top chunk, which is made up of four blocks.

I have used a small piece as an example, but the same principles apply to a larger piece. I start in the upper left hand corner and work my way to the lower right hand corner, making chunks and eventually sewing them together into larger chunks until the quilt is finished.

Let me know if you have questions.

You will have easy access to this tutorial via the link on the navigation bar to tutorials.

**Nota bene: I accidentally labeled two pieces of fabric with the number 8 in Step 1. Note that one is a piece of red sashing and the other is a block. Please look at the photos to assist you with the correct sequence of piecing.