Some time ago, I saw an episode of Simply Quilts on Mosaic Quilting. The artist was a southern woman named Shannon Williams and her idea was really interesting. The blurb for the episode is:

“What can you do with all your scrap pieces of fabrics? Mosaic quilt designer Shannon Williams joins host Alex Anderson in studio to give us the answer. She uses scrap pieces to demonstrate a mosaic quilt project called Blooming Sunflower. Alex reads a letter from viewer Kelly Biddle about her mom, Peggy Biddle, and the 50th anniversary quilt she created for her parents. Then, Alex talks to Peggy on the phone in studio about her work. QLT-705”

At the time (2003), after a class with Gwen Marston, I was working on Women’s Work and had a lot of red scraps around, so I started working on a piece using Ms. Williams’ technique.

It is not a project in and of itself. The idea is that it is ongoing and someday will provide enough new fabric so I can cut other shapes out of it. So far, this is what I have: 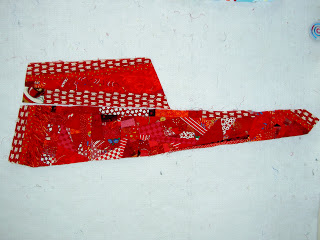 The long piece is the one I started with and the shape, after awhile, became quite unwieldy, e.g. not square or rectangular and quite useless. I was unwilling to slap some big strips on to make it a more normal shape, because I wanted it to retain that mosaic quality, so I started the second piece (shorter one) in order to sew it to the first piece and make more normal shape. I have considered hacking off a part and sewing it back on to another side/part of the original, but haven’t gotten there yet.

I haven’t worked on it for a long time as the piece has been covered by strips that I still feel compelled to collect for the Spiderweb. I saw the mosaic pieces peeking out from under said strips the other day and was reminded that I have some reds I could add to make the piece larger. Since I haven’t done any sewing this week, I thought it would be something to share with you all. 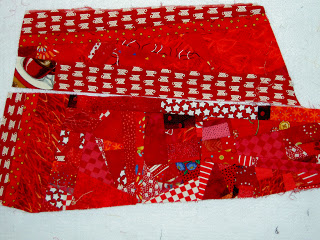 This is actually the first photo that I took today, but I thought it didn’t show enough of the detail nor did it show the entire piece. Perhaps I should ditch it, but I do like the way you can see how the two pieces will look together. You can also get an idea of how I simplified the piecing for the second piece. 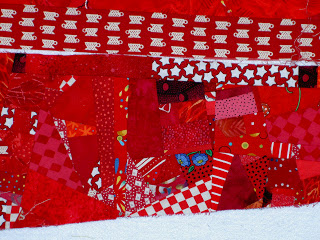 And here is a detail shot that shows the intricate piecing. At the beginning of this piece, I would fit any size scrap in, which made the piece beautifully complex, but also a nightmare of piecing. I need to add some of the intricate piecing to the second piece, but I haven’t gotten there yet.

The other thing about this technique and my particular piece, is color. Since I had the red and use a lot of red, generally, I thought I would make a red piece, because I was sure to use the ‘new fabric’ later. However, there are often other colors in fabric. You can see the white and some blue flowers and the brown in the coffee cup scrap. I think the other colors add interest, but I know that my eyes gravitate to the white. I don’t have a panacea for this, but it is something that I am playing with.

5 thoughts on “Everything Old is New Again”