After reading Cloth Paper Scissors all week, I got a bug in my ear to paint and layer stuff. It had been germinating for awhile and the CPS just put all the pieces together. I used to make book covers and postcards by cutting out pictures from magazines, gluing them down and covering them with contact paper. I still have at least one bookcover with such a collage. Not as sophisticated a process as the ones CPS describes, but creative nonetheless. I like to make things that are useful, I guess.

The World’s Finest Chocolate boxes are cool. Darling Boy sells chocolate from them every year and I love the shape. They are like little suitcases and I just couldn’t toss them out. I thought I could decorate them and make something. 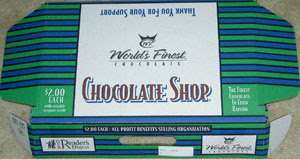 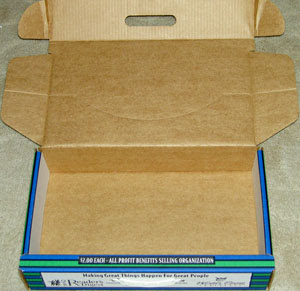 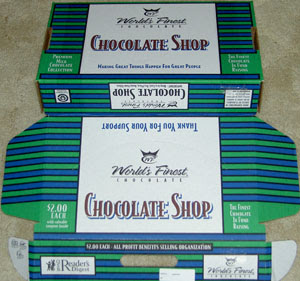 First, I went through my supply closet and pulled out all of the possible supplies. 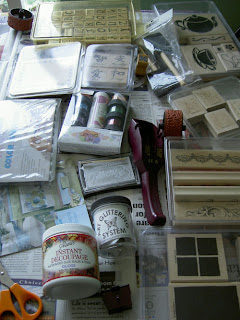 I am embarrassed to say that a number of the items were unopened. Some of the rubber stamps had never been mounted. It took some time to do all that.

Then I carted everything downstairs, covered the table DH had set up for me with newspaper and set out for the craft store. I knew, from reading CPS, that I needed Diamond Gel Medium. I don’t have a good art store nearby and the craft store didn’t have it so I reverted to some dark depths from my painting past and bought Gesso. On a whim, I also bought some Sparkle Glaze and some dotted scrapbook papers as well as a pack of cheap brushes.

Next, I covered the box with Gesso and let it dry. 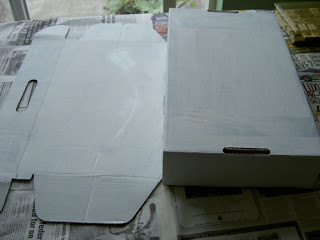 Drying was a problem. I didn’t factor that into the whole process. Not only did the drying take a long time, but the layers weren’t completely dry even after I waited. I have to admit that I was impatient to engage in the process. 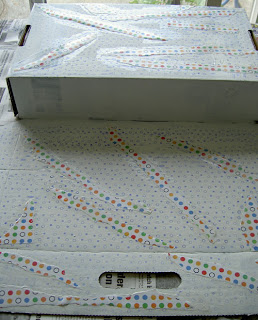 First I used a Stampin’ Up roller wheel and I stamped/rolled dots all over it in purple ink. I didn’t do that well, because I didn’t know how to ink the roller and roll at the same time. I wish I had paid more attention in Karenlee’s classes!

After the first layer, I began to feel some confidence and added some more scrapbook paper (see the yellow ripped into circles?) and began to add other pictures. 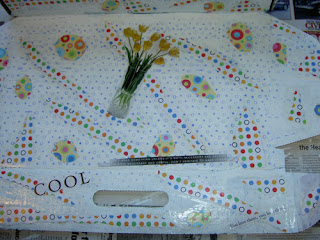 I started to apply some magazine sayings and pictures. The decoupage medium gave the piece a bit of a shine. 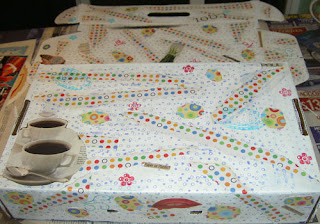 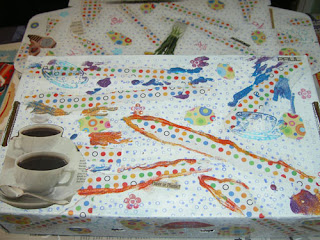 The glitter I added didn’t turn out as nice as I had hope. I know it had to do with my inexperience. I didn’t really know how to apply the glue the right way to make the glitter spread evenly. 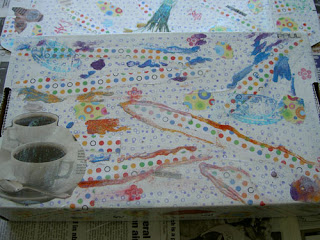 I also stamped the large cups and flowers on it. Some of the rubberstamping smeared after I put a layer of Sparkle Glaze on to finish the piece. This is pretty much how the outside of the finished piece looks. 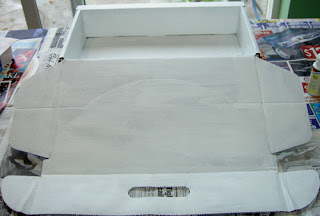 This is the inside of the box. I just painted it with the Gesso just to make it a little nicer looking. My painting skills aren’t great, but maybe I will put some fabric inside or something.

I was really out of my comfort zone doing this project, which I think is good. I thought it was fun. It was good to have enough time, though I know now that I need to leave the piece to dry longer. It didn’t come out as well as I would have liked, but I am not ashamed of it either. I have some more of these boxes and might like to try this project again. It got something out of my system.