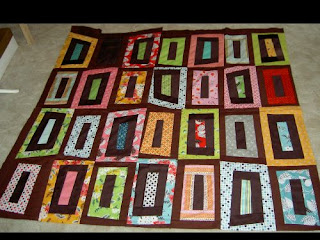 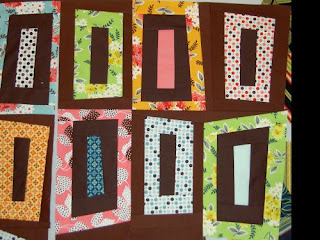 Often, I work almost all the time at one of my two jobs or dealing with other non-paid work type tasks. This past weekend, I threw it all aside, took Friday-most of Sunday off and went to a quilt retreat! Hooray! It was great! I spent Friday night, Saturday and a few hours on Sunday sewing.

I couldn’t completely get away from work, so I worked on the bookkeeping while I watched Law & Order and waited for Friend Julie to arrive. I did go visit Cabrillo Sewing, which is right next to the hotel (how convenient!). Little did I know that downstairs, in the Begonia Room, the other ladies were setting up and warming up their sewing machines. I was pleased that I did this work, however, as I felt a lot better about taking the weekend off.

As you can see, I wasn’t able to follow the directions that I originally set out for myself. The display quilt from Quiltworks Northwest that I saw at APNQ can be seen here. I am really not sure what happened, but as I drove down to the hotel, it occurred to me that I would rather work with rectangles.

Julie got my act together by arriving. We went downstairs with all of our stuff and set up for sewing. 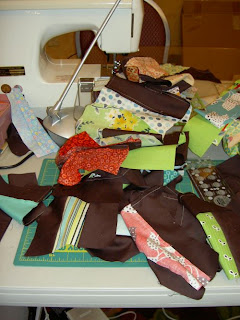 Here is my mess after cutting a bunch of strips and rectangles. We eventually went to dinner; we tried to go to a restaurant that serves only ostrich meat, but we couldn’t find it, so we ended up at a little Mexican place. It was storming quite hard and they had sandbags around the doors and cloths and things stuck in the windows to keep the water out. Quite the adventure digging for change for a parking meter in the dark in the driving rain where the meters give you 5 minutes for each quarter!.

I was amazed that we sewed as late as we did – 10:30 or so, then we went up and drank Sambuca and Limoncello while we watched more Law & Order and CSI. I am such a junkie for L&O- it is what I do in hotels.

The next day we sewed all day except for a quick dash to lunch and to a quilt store called Round Robin (Portola and 38th Ave). They had nice fabrics and the place was restful and organized. I bought only a few fabrics at the two shops. 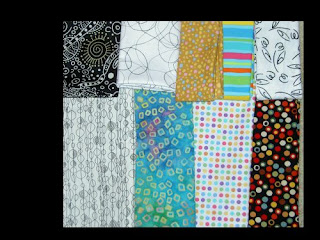 I used up about 4 yards of fabric in the quilt and didn’t want to buy more than I used. A novelty, I know, but I really wasn’t in the mood to buy fabric and didn’t see anything I had to have. The dots are nice. I hadn’t seen the one with the white background before. I went back and forth on the one with the black background as I don’t have an idea for a project. The other black-on-whites will be used for the Cross Blocks/Flowering Snowballs. 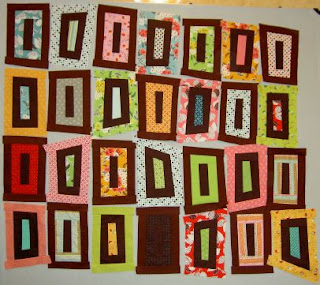 Aside from a quick dinner at a local Thai Restaurant, I sewed until about 11pm. I really wanted to get a handle on how I was going to put the blocks together. By about 9pm the blocks were finished, but I hadn’t made them perfect squares, so some figuring needed to take place. Terri let me use her portable design wall, which was absolutely necessary and I was very grateful to her for it.

I fiddled with placement a little bit, but mostly worked out how I was going to get different sized blocks together. Once I had about four done, I went to bed and let the process percolate while I slept.

The next morning, I sewed the rest of the blocks together and now have the top you see at the top of the post. I think I’ll call it the Chocolate Box.

So, one thing about this project was that it was not at all precise. I was ok with having to fiddle with putting it together, because I could just mindlessly sew whatever I wanted wherever…basically. I did have a semblance of a plan. Second, I am glad I used the rectangles instead of the squares, because it makes this project mine while allowing me to be inspired by another quilt. Third, there was enough structure to keep me grounded with enough freedom to relieve the stress of the Pineapple Problems.

I don’t have any pictures of it, but Friend Julie is taking a mentoring program from Gabrielle Swain. One thing that she does is “show up”. That means that she gets into the studio every day and works. For her, that is four hours a day. WOW! I am so impressed, I can’t even tell you. I admire her for the commitment. She isn’t just sewing, however. She is noting down her ideas in a visual journal and it is the visual journal I want. My little drawings looks so sad compared to the exuberance of her work. I look forward to seeing more of it and getting to that point as well.

Everyone should really go on a quilt retreat once in a while. Boy! I would love to do that once a month. I can’t believe how much I got done in 17 or so hours of sewing. Amazing!

2 thoughts on “Quiltmaking By the Sea”