TFQ and I went to Quiltworks Northwest in Bellevue on Friday. At the shop, TFQ saw this bag made up and bought the pattern. The pattern is called Eco Market Tote and is from Favorite Things. I don’t normally buy or even think about non-quilt things, so I didn’t pay much attention. I was interested, but not from the making point of view. I am not sure what lit the spark, but after we visited the Quilting Loft and saw the Alexander Henry Home Dec fabrics, I knew I wanted to make one. TFQ suggested that we make them and it was a great idea. I would have never finished mine if TFQ and I had made the first ones together/at the same time. While we were working with our own fabrics, we puzzled out the directions together. We, unfortunately, got the first printing of the pattern and there are a few mistakes, which have, since, been corrected (TFQ contacted the company). We also made some adjustments, like making the handles wider than the pattern calls for.

The fabulous thing that I found is that this is a great opportunity to work in series. No, it is not a quilt, but it is a great canvas for showcasing fabric combinations. There is also a lot of room for creativity – different types of pockets, different fabric combinations, different fabric ratios and even embellishment. I know that TFQ has picked out fabrics for two more and I would like to make more as well. I have several large conversational fabrics in the quilt backs stack that would really be great as bags. I also have some great French fabrics that a friend brought me from France that would make excellent totes.

This is my bag. As mentioned, the fabrics are from the Alexander Henry Home Collection. They feel like canvas, but may be a kind of cotton duck. I am actually kind of stunned that I picked them out as the accent fabric has a lot of brown and all of the fabrics are very 1960s looking.
This was a great project to branch out in the fabric department and try something new. I wouldn’t buy these for a quilt, but for this bag, they are great! 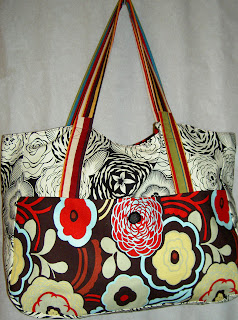 Back of the bag in construction phase. 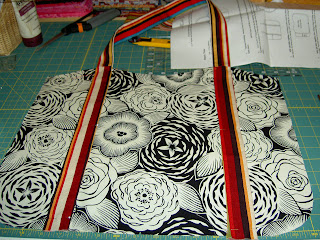 Front of bag with pocket pinned on. The back and front are the same until you put the pocket on. The above picture is how that back looks and the picture below, as you can see from the picture of the finished product, is how the front looks. 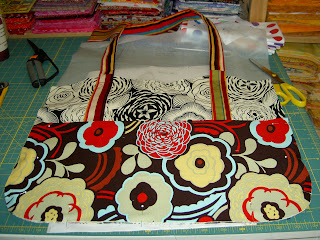 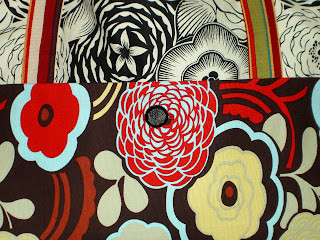 This is the third bag. TFQ made it today. 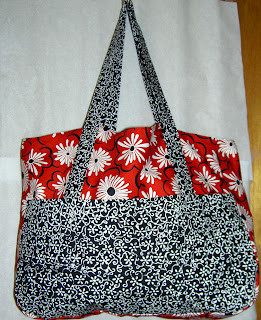 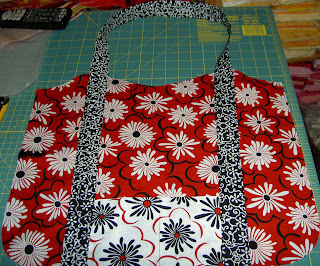 She added two more pockets on this side to break up all the black. The new pockets do a good job of bringing the red fabric back into the limelight. 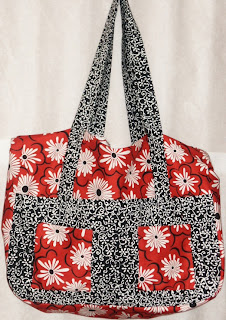 The lovely piece below has the distinction of being the first bag we completed. It is TFQ’s bag, but I think it was a real collaborative effort – at least int he brain power department. This was also the bag we learned on. The fabrics are fabulous and it turned out really well. 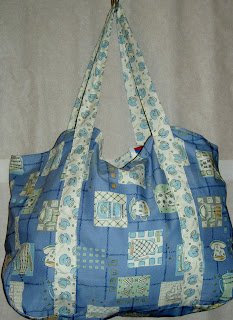 Detail of the the reinforcing X stitching to keep the handle secure. 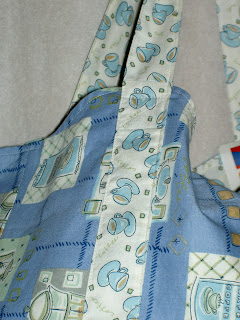 5 thoughts on “Series of Bags”