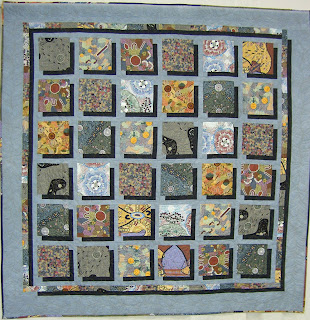 The East Bay Heritage Quilters held their bi-annual show last weekend at the Oakland Convention Center. The best part of the weekend was that TFQ came down to visit and go to the show with me. As usual, I took a lot of pictures. TFQ has a new camera, so her photos are included in the group, which I have added to Flickr.

The show was well hung with plenty of room to look and photograph. The lighting was excellent and while well attended, it wasn’t so crowded that we had to fight with people to see the quilts. The disappointing part of the show was the brown. The overall impression of the show was that there was a preponderance of quilts made from brown or beige or some equally depressing color. These were not the rich chocolate browns of dark chocolate, but the sad, world weary browns of a country/area that is sad.

The above quilt, by Carol Lee Blangsted, a former president of EBHQ, was probably my favorite in the show. The fabric didn’t make my heart sing, but the design was wonderful and the quilt was well executed. Ithought it was a good design for the lovely large print fabrics available now.

The shopping was ok, but there weren’t nearly enough vendors selling fabrics and there were barely any fabrics from any of the new groups that have come out recently. Their loss was Black Cat’s gain. 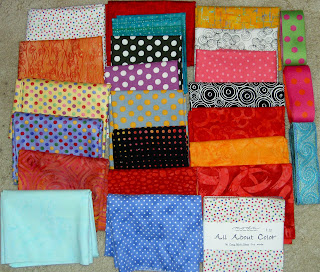 We spent a lot of time at Black Cat chatting and looking at the fabric. We didn’t get as much bang for our buck, but the fabric choices were fantastic.

I did buy a few fabrics at the show, and one booth, a friend of TFQ’s, had luscious ribbon (see right side of picture above). As you can see dots are still the rage in my life! 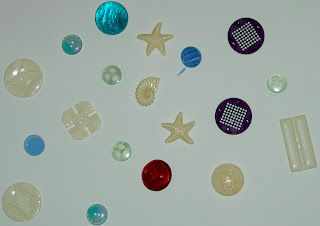 I was also on a button kick. The totes require a button and I have been at a loss to find the right ones for various projects. I stocked up at Britex on Friday and partook of one booth’s antique buttons at the show.

The above fabrics were a gift from TFQ. YAY!