I often find older patterns that don’t seem popular, but have very interesting shapes or lines. I see them at shows in antique quilt exhibits or in books or in early to mid-century magazines or in Barbara Brackman’s book or ripped out of ancient newspapers for sale on eBay.

Mostly, they cannot be strip pieced. Let’s face it, some of those patterns are nearly impossible to piece with the patterns given. Remember the Snowball Wreath? The Flowering Snowball is also no picnic to piece, though completely doable.

I was cruising around the web and found my way to Mrs. Schmenkman’s Quilts somehow or other. Those pesky links, you know. 😉 There I found another, yes ANOTHER spiderweb quilt. 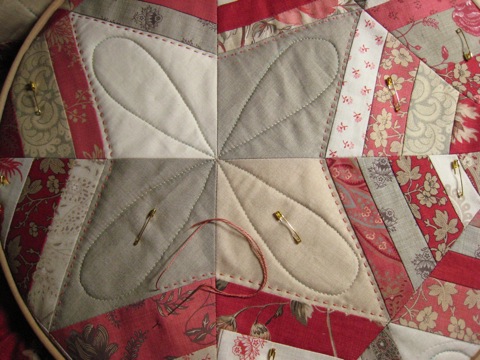 The hand stitching is a nice addition, don’t you think?

It is very obvious, at least to me, now that I don’t get out much. Here I am sitting in my workroom sewing away on quilts with patterns that I think nobody is interested in. then I find a whole quilt subculture of people making the same pattern. 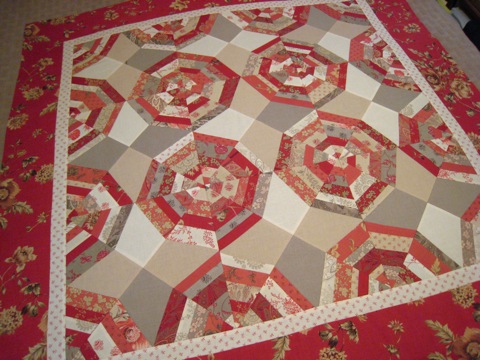 This just makes me think that I am too isolated in my quilting world. I sit in my workroom and work on pieces in which I am interested. I don’t get a regular influx of other people’s ideas except from the web. The web is good, don’t get me wrong, but I don’t think it is enough sometimes. OR I am not cruising round enough.