From the inspiration department: 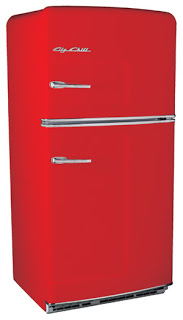 Big Chill Fridge. They come in a number of different colors, much more interesting than stainless. 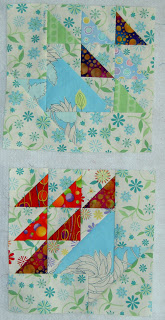 The above are two blocks I made for group quilts. I sent them off today as well as made them! I know it is Friday and I never sew on Friday, but I was hitting the deadline wall and just had to do it and send them. 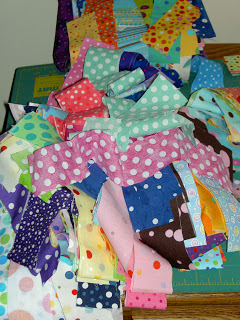 The Pineapple project requires lots of strips. I am not sure I am cut out for managing such supplies for this project. They are everywhere and I can’t seem to find good combinations of strips. I have seen curtain rods that people have set up on which to hang their strips, but I don’t have anything like that at the moment. Bleah!

Still, I soldier on and I seem to be making progress. I finished the strip part of the second two blocks. I still have to put the triangles in the corners, but will do that later.

I have made some progress on the Pineapples. I am working on them in between everything else so I don’t feel guilty about starting a new project. Yeah, yeah, I know guilt is not productive. Above is the first bits of the second two blocks. 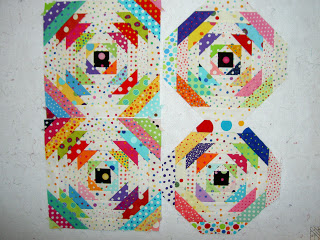 I have made more progress on the second two blocks. I am about 3 rows away from finishing. One thing I did differently in the last few rows is add new backgrounds. the size and spacing are different from the background fabrics I have been using. We will see how they turn out and if you think they scream “INAPPROPRIATE.”

I also added some fabrics with smaller dots. In these photos they look like tone-on-tones. We will see if I use them again.

Although rain is forecast for later, the sky is blue and it is very warm outside. Despite all the weird weather we have been having, today things seem back to normal as we always have a week or so of warm weather in the middle of February. I can remember sitting out on our fire escapes as an undergraduate, sunbathing in mid-February with the other girls with whom I lived.

As a result of my renewed good spirits I have finished the back of Serendipity Puzzle. As seems to be my way lately, the thing has turned out to be a monster. Not as monstrous as Thoughts on Dots or the Nosegay, but larger than my design wall, which, in my book, moves it into the monstrous category. It makes it hard to take photos of these quilts!

Sometime in the last week or, perhaps, last weekend I put rickrack on the border of the quilt. 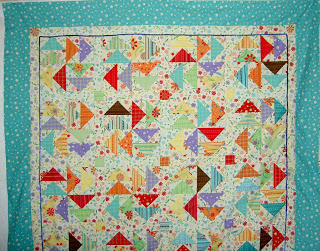 As I mentioned, I thought the quilt needed something and this is what I came up with. Deirdre actually suggested rickrack “or something.” I had some rickrack, but not enough to go around all the way. I used two different colors rather than buying more. I think it looks fine. The only irritation is that I pulled the rickrack a little too tightly as I sewed it on, so the quilt puckers a bit on the border. I thought about unstitching and then decided against it. If the quilter can’t make it ok, then I will unsew it and do it over. Live and learn.

Still I am pleased. I feel like I have made progress.

Making backs is such a bear! I know now why people buy 108″ backing fabrics. As you know, I have two more to go and was going to have a marathon, but I think I will make a few blocks, work on the Pineapples, perhaps work on the QA challenge and rest a bit. I am looking forward to making the back for the Nosegay despite the fact that it, too, is a giant, as I want to get all of those 1930s fabrics into a project, so I can use the bin for dots (or maybe stripes). I know I can easily buy more bins, but my shelves are full of bins, so buying more bins would do me no good since they would just be dumped on the floor with everything else that doesn’t have a home.

So, the fog came in, but it didn’t get cold, then it went out again. Now it is cooling off a bit. It doesn’t look like rain clouds, but I would rather have rain than fog. Have a great evening! 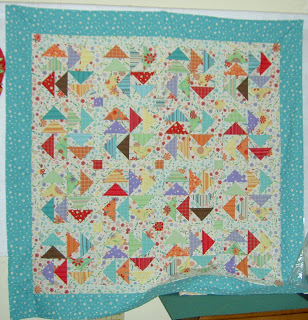 Too big to photograph properly, but you get the idea. It needs something…

So I am a few days late. It is never too late to think about how to make life better. Luana Rubin writes eloquently about her thoughts for the new year. 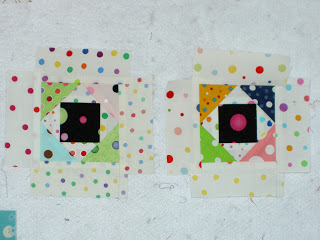 I can’t help, but working on these little gems intermittently! I will need to add some fuschia.

I put the first white/background border and the cornerstones on the piece last night and this morning. Intermittently, I have been working on the back. I may have mentioned that I am using some of the leftover fat quarters. I am mostly not using the stripes, because they will be good for the Stars in Stripes quilt that started out as a test that I will probably make into a quilt. It is pretty far down on the list. 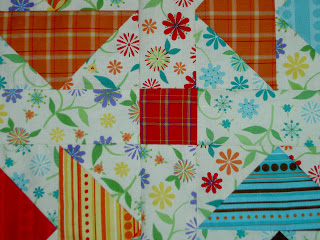 This is a secondary pattern that I saw after I put the first border on this morning.

An article in the New York Times online showed Zaha Hadid’s design for a performing arts center for an island in Abu Dhabi. It reminds me of a Bionicle mask or a car brand’s logo. I love the blue and the swooping sort of shape. I also like that a woman designed it. What inspiration! 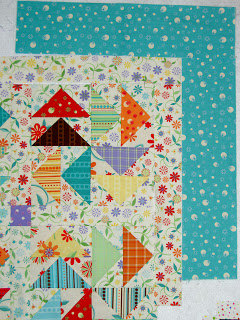 This was my original idea. After I put it up on the wall I wasn’t sure. 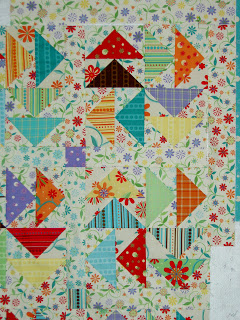 I then thought about just putting a smallish border on with the white background fabric. The size would be the same as the sashing size (1.75″ finished). 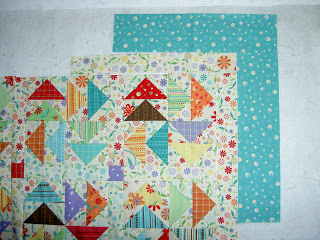 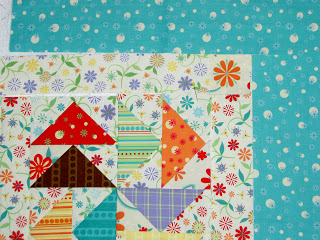 This morning I looked at the blue and white borders again and added the cornerstone (fussy cut to display a flower motif) and decided that I like the combined look. There is something about the blue that finishes the quilt. I also noticed that the blue makes the various blue fabrics in the quilt stand out a bit more.

I have to say that I got such a feeling of joy when I was scrutinizing this quilt and looking at the Pineapple Blocks. I think joy is a good thing and will go with the blue and white layout. 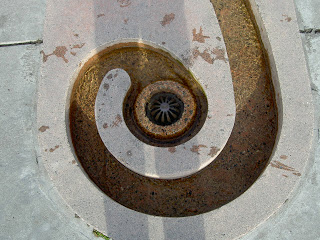 The end of a fountain near Zeum in Yerba Buena Gardens. I love-love-love the spiral. 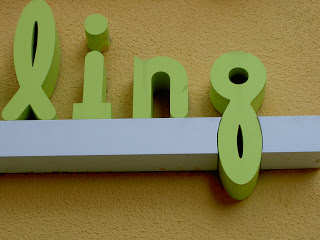 I don’t usually sew during the week. It is a habit I got out of some years ago due to general evening chores, preparation for the next day, etc. Tonight I just decided to sew 3 more seams and now the top of Serendipity Puzzle is complete. 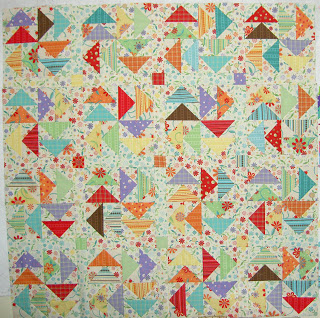 Here is the entire piece. It is very busy and the reds and brown do stick out. It is cheerful. I could just make the back and have it quilted, but will try out some borders before I do that. 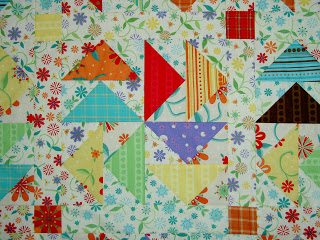 Detail of one of the blocks.

Learning to do something new makes the first two blocks or parts of a project practice. For this project, and, yes, it is now on the project list, I am pretty pleased with these two blocks. The blocks are fairly flat, there is no paper to rip or muslin to quilt through.

I spent some time yesterday putting the last two rows on as well as the corners. I may have to remove the corners and put others on, as they need to be a bit bigger, but we will see.

I am very pleased with how the fabrics look together.

I am still cutting strips, which is a drag, but I will be happy when I have piece of all of my dots cut.

Here is my last try at figuring out which fabrics to use for the sashing. I decided against the larger print background fabric. The background of that particular fabrics is not as bright as the background on the others. Also, the motifs are so big that they mostly got cut off. 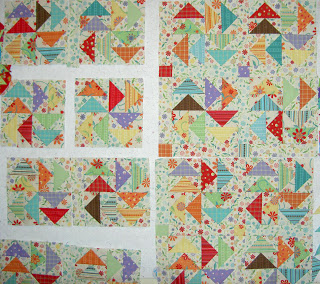 Once again, I am trying to sew it together in chunks (rather than rows) to keep the piece straighter and more manageable. 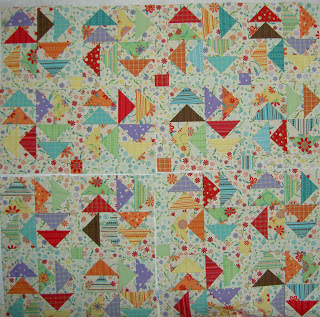 Essentially, I have two more seams to sew to get this baby done. I can’t avoid them being long seams. Of course, there is the border. I, also, already started the back.

The class was great.

I had enough dots, but could have used more.

The Pineapple Ruler is totally worth the money. 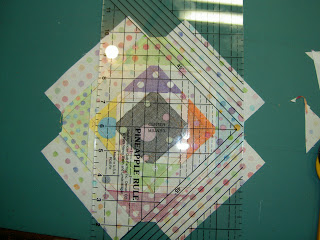 The above photo shows how to place the ruler to cut the pieces. No foundation.

Here are the blocks that I made: 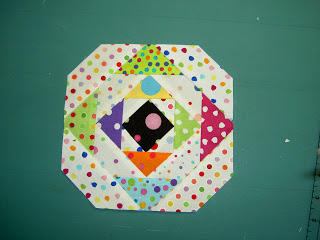 This is how my one block looked after a couple of rows.

This is how my two blocks look now. I have two more rounds to go: I have to put some strips on the corners and one triangle on each corner then each block is done. I should have cut the strips in advance, so I would have had more sewing time, but I didn’t have the time, so the point is moot. 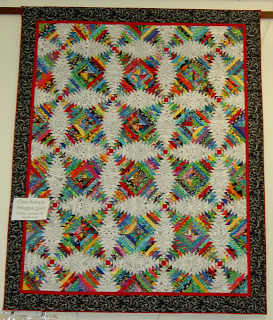 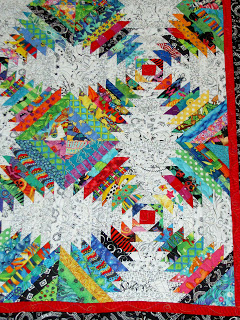 This is the teacher’s, Katrina Lampken, quilt. She did a nice job teaching. She a little background on the Pineapple block. She talked about different ways of making it and why she liked this method. Then we got started. She was able to answer all of the questions. She was really mild mannered, but go her point across. It was a great day.

These are some of the other student’s work: 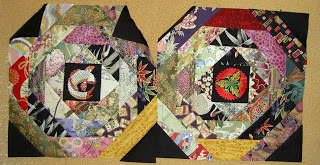 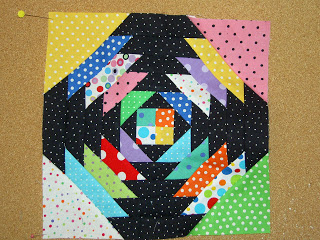 Barbara from San Ramon (we were dot sisters) 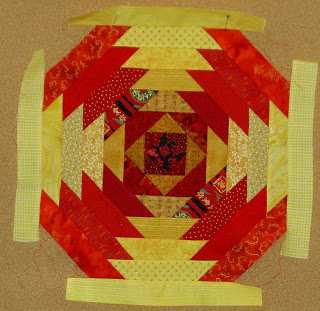