It is very hard for me to accomplish anything if I am not organized. The first thing I do on any project is organize the pieces. I get a lot done, I think, because I am organized. It drives a lot of people close to me insane.

The fabric closet in my workroom had dropped off the organization list sometime in the last century. I have been flinging things into it randomly for some time. There was no space for me to get into to do anything. I knew I had to take everything out [EVERYTHING!!] and start over. There was no possible way I could face such an endeavor alone. TFQ mentioned it last year when she was here for PIQF. It had gotten so bad between times that this trip she convinced me it was time. I also asked her to help me clean it out.

I threw out, recycled, and organized, for Goodwill and Freecycle, a ton of stuff. It felt good. I have been on that binge for awhile in other parts of the house, but this was a major quilt/fabric related effort.

Sadly (or perhaps not), I didn’t take before pictures. I think that is, at least, partially a good thing. I do have the after pictures. 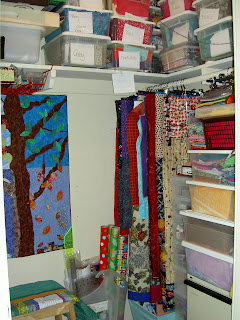 Closet Right Side: Quilts are on pants hangers and hung in the corner. File cabinet was moved closer to the door so I can file paperwork easier. Fabric bins that I use a lot were brought down, so I don’t have to crawl up to get at my fabric quite as much. We didn’t do much with the fabric bins, but have gone through them together in the past. I have also been going through them recently as I work through the bag project. I will go through them again in the future, I am sure. 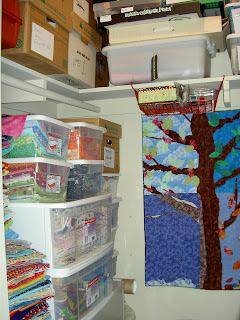 Closet Left Side: The new drawer thingy is full of dots. Closest to the left side of the photo is a continuing part of the project. I have to get some crates to replace the bankers boxes for ‘current’ fabric. In the middle on that upper shelf is a weird bin (the style of the bin is weird) full of projects in process. They are organized, so I can find them, which is a good thing, because I would like to move through some of the projects that have been lingering. I also went through a lot of of my projects that were going nowhere and got rid of them. No point in keeping something that never even made it to my UFO list. A number of them were block exchanges from the early 1990s. Lots of teal went to people I hope will make great quilts for others. 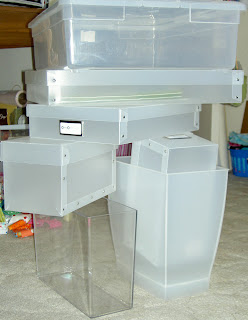 We really needed one more day to get the project completely finished. We didn’t have it, so TFQ sent me to the Container Store with a list of items to buy. Above are the containers I bought to fill with stuff. The clear plastic garbage can is full of rulers now and I want to get another. After I filled it up, and amazingly all of my rulers fit, I decided that I didn’t like the rulers with instructions and packaging in the same container as the regular rulers. The other frosted garbage can was a ruler possibility, but the shape is wrong. I may actually replace one of my garbage cans around he house with it. I am definitely going to get another one of the clear plastic ones.

PS. I surpassed 450 posts yesterday. Thanks for reading!