I can’t really decide if I am making progress on this project. It has been on my wall for awhile and all the ways I have tried to arrange the pieces have not been successful or satisfactory. I want to finish it and get it off my wall, because it is a dark quilt and doesn’t make me feel happy when I look at it. I like the quilt, it is just the wrong time of year to have a dark quilt on the wall. 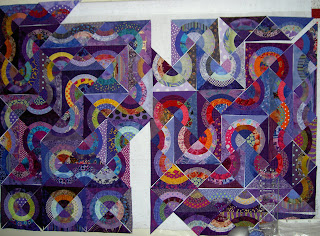 Until yesterday, the above photo shows the most recent design. It had been on the wall for awhile and I knew it wasn’t working, but was considering sewing it together just to be done with it.

Sadly, this layout looks like two separate quilts, which is not good. I suppose I could put one on the front and one on the back. Not happening. I want a cohesive/unified design. I seriously like the snaky bit highlighted with the warm colored (red and pink) fabrics, but I couldn’t figure out how to include it and all the other patches. I like the half block wedges (see photo below) that end up, often, in the corners, s, in this iteration, I tried to replicate those on the left side of this layout. It doesn’t solve the problem of two quilts in one and the wedges don’t show up very well in the overall piece. 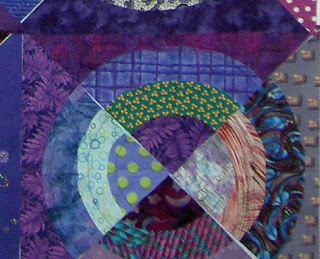 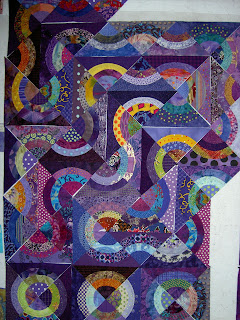 Detail showing my attempt at the wedge design.

I saw a quilt of Kerr/Ringle’s called XO in the Modern Quilt Workshop book. The blocks had patches the same shape as my bullseye wedges, but Bill and Weeks had added a thin strip of fabric in between. Above shows my attempt at using their idea. I considered trying a purple/violet fabric, but ultimately didn’t choose this option, because I was too lazy to find the right fabric and think I came up with a better idea. 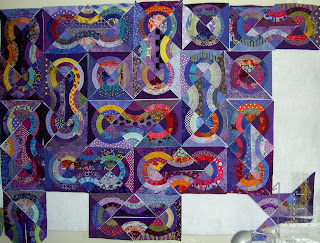 Yesterday morning, I had a brainwave and the above layout is it. Is isn’t finished and there are still a couple of problems to work out, but so far I like this layout the best of all. The red/pink snake is gone, but so is the two quilts in one problem. Some of the problems I have to work out are:

None of these are as insurmountable as the layout. I think I have a good one here and will move forward with until such time as it is finished or I decide it was a bad idea.