I almost never sew during the week anymore. I used to sew almost every night, especially back in the dark ages (especially bW) when I had to wait for a port to open to connect to the UNIX based Internet, but then life happened and work grew more demanding and I seemed to not be able to find the time. Yesterday, I found myself, unexpectedly with a free afternoon. After making sure my most arduous work tasks were done, I raced with glee up to the workroom and got down to it. My spine actually tingled with the thrill as I started to touch the fabric!!! I know that sounds like a stupid sentiment, but there you have it.

Frankly, I wasn’t sure what to do when I got up there, but, with a limited amount of time, I quickly told myself to stop wasting time and start work. 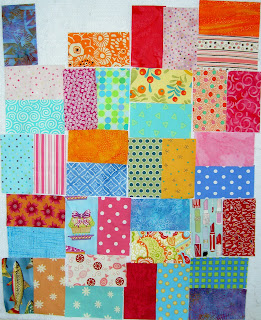 Julie’s Bullseye pieces had arrived so the, as yet unsewed, FOTY* pieces had to go. Before I took them down, I took a picture of what was happening, because I particularly liked the interaction of the turquoise blue and the pink. For FOTY, I like to fussy cut motifs from conversational fabrics. The fish is from the fabric I made Dad’s pillow covers from. 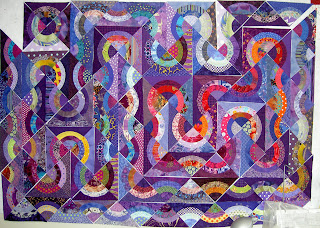 Here are all of the Bullseye pieces I have received so far. My pieces as well as Julie’s are shown. My pieces are mostly on the right and Julie’s are mostly on the left. I played around with them after I took the above picture and realized that I am glad I didn’t receive all of the pieces at once. It has allowed me to contemplate the arrangement of the pieces without being overwelmed. 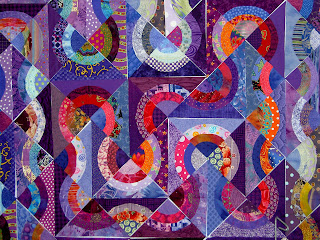 This will, hopefully, be the focal point of the piece. If not THE focal point, perhaps it will be one of the focal points. Receiving Julie’s pieces allowed me to make this area stand out more because of the way some of the colors were placed. When I receive AJA’s pieces, I may be able to use some of her pieces to make it even stand out more. 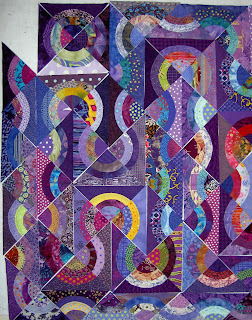 This is primarily the section where I placed Julie’s pieces initially. They will get moved around as I swap sections out. 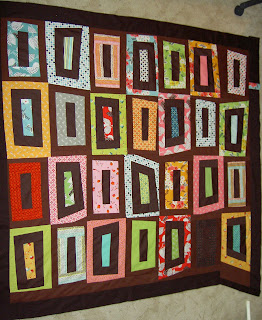 I also worked on was the Chocolate Box (above). I needed to straighten up the borders, which were quite wonky, so I proceeded to put borders on. The photo above looks weird, I know, because it wasn’t taken straight on (I was standing on a stool on, what is now, the left side of the photo) and then I rotated the photo. It is pretty straight except for the little jog in the left, bottom corner.

When I started this quilt, it was mind sorbet for me. I want it to continue to be this way and so I didn’t think very much about what type of borders to add. I just began sewing. I hope it will be successful and I think it is so far, but I don’t want it to be a serious project. As a result, I don’t want this quilt hanging around; I want to finish it. I don’t mean to make it sound like I don’t like it or that it is somehow a stepchild project. It is an experimental project and I want it to stay that way.

I put on all the borders and pronounced it done. However, when I looked at it this morning, I decided that I needed to do something about the jog. Although it is at the bottom, I think it will cause me problems later- with quilting, hanging, etc.

I may work on the back before I go back to the bottom border. I am interested in what you think, though, so let me know.

*Fabric of the Year project pieces