I have been slack about posting my various holiday adventures, but, with this post, will try and redeem myself. One of the great things I did on my break over the holidays was go to the SFMOMA with friend Julie. My goal was to see the actual journals from the 1000 journals project in person. Julie has posted a great set of narrated photos about our adventures.

The 1000 Journals project has, for some reason, captured my imagination. Faithful readers will know that I have posted about it, gone to see the film and have been trying to get my hot little hands on one of the journals. The film depicted a lot of back and forth with the SFMOMA about this exhibit because Someguy wanted to allow people to add to the journals. A great idea, but the curators aren’t used to allowing people to touch the art. I was really happy that they finally were able to work everything out.

They ended up putting the project in the Koret Education Center. There are people there to watch you, somewhat, working on the journals, so it probably made them feel ok about touching.

Stupidly I didn’t plan ahead and bring an art kit like I had planned, so I rummaged through my purse to see what I had:

With the pencils, glue sticks, pens, etc that the SFMOMA provided my theme turned into bureaucracy. I was able to make a page with which I was pretty satisfied. As Julie said, it was hard to make art standing up. Not very comfy. Other viewers of the exhibit also have a different sense of personal space than I do, so I had to glare at some people who were just too close, and ask them to step back. 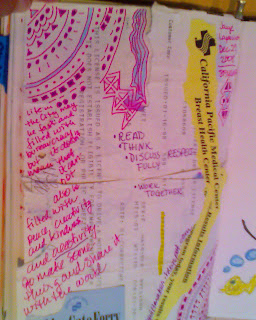 I was disappointed to see that some contributors had basically defaced the books with a message of anger and hate of their own. If I had had colored paper, I would have glued it over those messages, which, I guess, is defacing the books as well, in a way. There was a lot of 13 year old boy potty humor as well. Sad to think that people aren’t enlightened enough to think up something that they would be proud to have endure through the ages. Perhaps I am just being a snob because what they wrote doesn’t fit my idea of ‘good’.

I had fun. I found that I actually can do a visual journaling piece. It made me think that, perhaps, I have too many options at home.

I am happy that I got to spend the day with Julie (no children/young adults=freedom) and that I got see and write in the journals. I feel like I made a contribution. The journal I wrote in was number 754.

2 thoughts on “SFMOMA and the 1000 Journals Project”